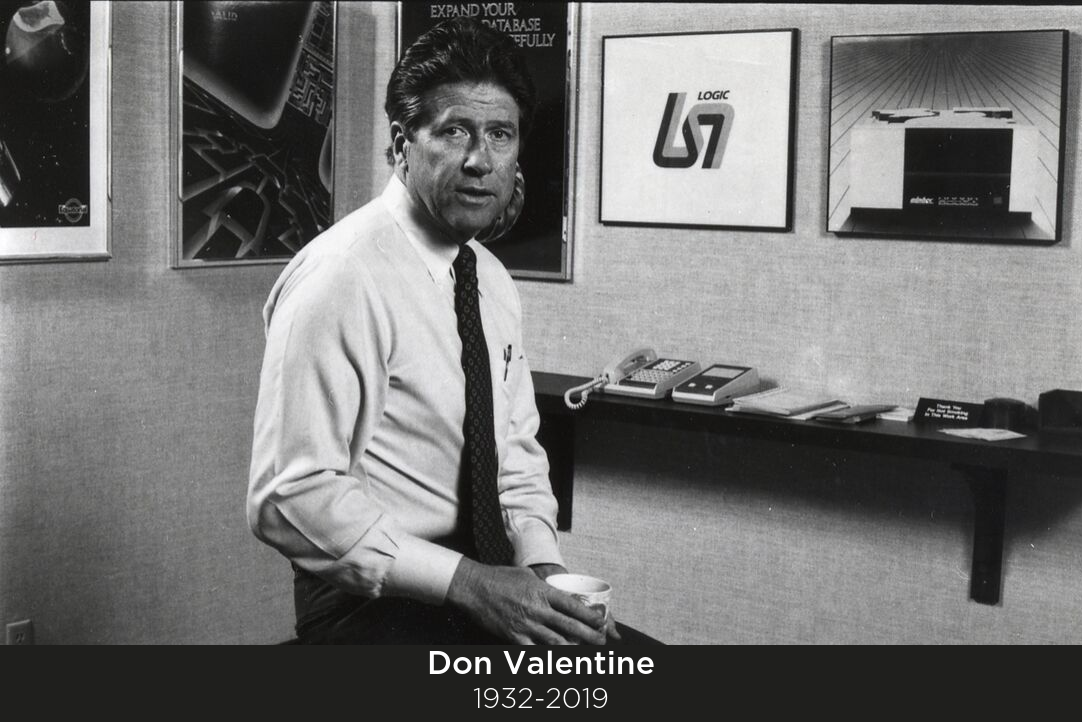 Don Valentine, founder of Sequoia Capital and one of the generation of leaders who forged Silicon Valley, died today aged 87 at his home in Woodside, California. He shaped Sequoia and left his imprint not just on his family and friends and those who worked with him, or the many philanthropic institutions that have invested with Sequoia Capital, but also on the Founders and leaders of some of the most significant technology companies of the later part of the twentieth century. Our deepest sympathies go to Rachel, his wife of 58 years, his three children, Christian, Mark and Hilary, and seven grandchildren.

Don’s life is woven into the fabric of Silicon Valley. Born in New York in 1932, he studied chemistry at Fordham University before moving to Southern California in the mid 1950s to join the burgeoning aerospace industry where he became a sales engineer with Raytheon. Understanding that the epicenter of the young semiconductor industry lay further north, he moved to the San Francisco peninsula to join Fairchild Semiconductor, a spawning ground for several later spinoffs – including Intel, Advanced Micro Devices and National Semiconductor – which, in turn, helped power the growth of the mini-computer, personal computer and inter-networking industries.

After seven years at Fairchild, where he helped build the most competitive salesforce in the semiconductor industry, he joined National Semiconductor as its founding VP of Sales and Marketing. During the time Don spent at National, the company became known for the sales and operational prowess which made it a leading supplier of analog circuitry.

While at National, Don started making personal investments in technology companies and his sideline interest captured the attention of the privately-held Capital Group – one of the earliest managers of mutual funds. Together with Capital, Don established Capital Management Services which formed its first $3 million venture capital fund in 1974.

This first fund made seminal investments in Atari, the pioneering videogame company started by Nolan Bushnell, and in Apple Computer, a company started by a onetime Atari employee, Steve Jobs, and his high school friend, Steve Wozniak. Don served on the Boards of both Atari and Apple.

These early investments put what later became known as Sequoia Capital on the map. Don’s choice of name for our partnership was in keeping with the man. It conveyed the longevity and strength of the tallest of redwoods with the humility of someone who refrained from putting his own name on our business.

Don was Sequoia’s driving force and central figure until the mid-1990s – a period associated with the formation of many enduring companies which bore his hallmark. These included Oracle, LSI Logic, Microchip Technology, Linear Technology and Network Appliance. The company of which he was proudest, Cisco Systems, made much of the plumbing for the internet and his service as Chairman from the time of Sequoia’s original investment in 1987 spanned three decades.

Don also nurtured two companies whose business plans and formation occurred within Sequoia’s office – Electronic Arts and Sierra Semiconductor. The former became a mainstay of the videogame business while the latter led to the creation, with the Government of Singapore, of Chartered Semiconductor which, as a manufacturing company, helped change the complexion of the global semiconductor industry.

Beyond Sequoia, Don’s fondness for rainswept Scottish golfing vacations, Pebble Beach, the Oakland Raiders and the accomplishments of Tom Brady were apparent. For many years he was a devoted supporter of the Stanford School of Engineering and helped orchestrate the Stanford Engineering Venture Fund which became a model for universities across the nation. He was also a keen supporter of medical research. Less well known was his affection for the San Francisco Opera (where he was a longtime member of the Guild) and the San Francisco Symphony where he served as a member of the Board of Governors and an enthusiastic backer of its leader, Michael Tilson Thomas.

In his later years Don was a ready source of advice for those who stopped by his office and, unlike most former leaders, resisted the temptation to criticize decisions which he considered misguided or to meddle in the business. Ever curious he relished spending time with young people brimming with ideas about the future. His family and friends and those who spent decades working with him harbor a trove of affectionate memories of the quirks and habits of a man who favored green ink, never drank coffee, listened carefully, understood the virtues of silence, built the foundation on which so many have the good fortune to stand, and insisted that the ultimate test for every startup was a thoughtful answer to his perpetual question about its quest, “Who cares?”